The Basics of Ferrofluids

Today, Brian will be filling in for Ketton due to last minute scheduling issues, we apologize for the post delay.

Ferrofluids are quite complex fluids that display interesting behavior in the presence of magnetic fields.  These ferromagnetic fluids are created through the colloidal suspension of ferromagnetic particles of the nano-scale.  What does this all mean? In simpler terms, you essentially take tiny (nano-scale, or on the scale of a nanometer/a billionth of a meter; think the size of the base width of a single strand of DNA) magnetic particles and disperse them homogenously (or evenly) throughout a carrier fluid in a way so that the particles are fully wetted (meaning that the particles surfaces are fully coated by the liquid, without other particles in contact with them).

Because of the aforementioned strong attraction between the liquid molecules, fully immersed liquid molecules are pulled on by other molecules in all directions, as shown above in the picture.  However, the molecules on the surface are only pulled on by molecules around and below (but not above) them, leading to a breach in the equilibrium and causing the water to be pulled in the direction of the rest of the water (hence the curved water surface exhibited in the above diagram).  So, armed with this knowledge of how surface tension works, we can revisit the ferrofluids and figure out what is going on. 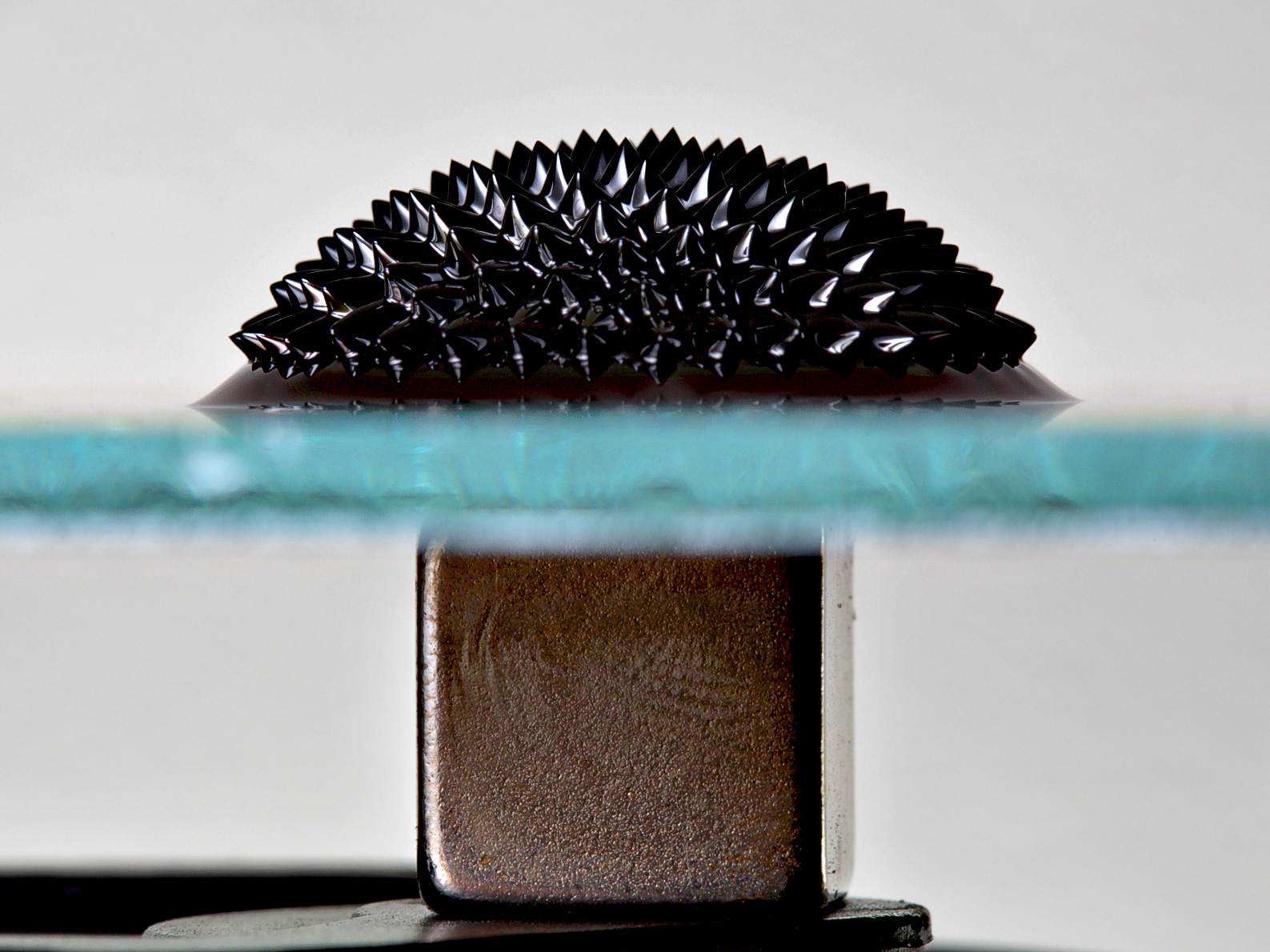 The magnetic field wants to push the ferrofluid outwards, but the ferrofluid itself wants to pull itself back inwards towards the liquid base due to the surface tension, all while gravity is also resisting the spike formation (this kind of interaction is explained through the normal field instability).  At some point all of these forces equate and the fluid is said to be in equilibrium.  The result of this?  Really cool looking spikes in the ferrofluid as shown above.  This gets even cooler when sculptures are created (as in the top picture) by using shaped bases and manipulating the shape of the magnetic field.  It should be noted that art is most definitely not the only application for these fluids; in fact, ferrofluids also find application as: liquid seals around the shafts of spinning hard disks/drives, as a convective heat transfer fluid for wicking away heat in small scale and low gravity application, as an imaging agent in some medical imaging techniques (especially magnetic resonance imaging, MRI), as friction reducing agents, as mass dampers to cancel out vibrations, and even as miniature thrusters for small (nanoscale) sattelites!

So there you have it, another awesome engineering phenomenon!  Please tune in Sunday for Ketton’s last Open Mind post and remember to continue following us at EngineeringAFuture.com when Engineering A Future (EAF) launches on Monday, July 13th!  Enjoy the video below, created by altering the magnetic field in a ferrofluid sculpture!