As many of you are aware, we are in the transitioning phase of this website as we close out TeamUV.org and transition to EngineeringAFuture.com over the next two months, so this will be my last Presentation post here at Team UV, but not to fear, there are still two months of posts left here and the same types of articles will be carried over onto EAF (Engineering A Future), so without further ado, please enjoy the following:

Today I’m going to be doing something a little bit different; I’m going to stick with the three-approach style of our Open Mind type posts, but rather than talking about the design/analysis/engineering/etc. behind real world science or technology, I’ll be demonstrating how engineering subject matter can be used to draw conclusions about life lessons.  This is an important exercise for engineers, as many engineers and engineering students unfortunately become trapped within the framework laid out by their coursework with regards to their engineering mindset.

This is to say that many engineers only practice engineering and apply their knowledge within the confines of where/how they have been taught to apply it (i.e. in the design of a machine, or in the thermal analysis of a heat exchanger, or in the development of a control system for a robotic prosthetic arm, etc.).  In reality, engineering curriculum can be applied in endless scenarios and the engineering mindset can be used in an infinite amount of situations outside of the world of engineering.  Abraham demonstrated in a recent post how the engineering mindset can be used to solve everyday life problems (click here to  read his post), but today we are going to talk about how the subject matter, specifically, can be used to teach life lessons by demonstrating this practice through three examples.

So without further ado, let’s get started!

Often times in life we find ourselves trying to do it all, and in doing so, stretching ourselves pretty thin.  For a mechanical engineering student this might look a little bit like the following scenario: working full time, going to school for mechanical engineering, minoring in materials engineering, leading team projects for classes in materials science, heat transfer, and mechanical measurements, while on a senior project team that requires highly complex, innovative work in the subjects of materials science, mechanics of materials, fluid mechanics, heat transfer, control systems, dynamics, etc., while applying to grad school, while searching for and applying to internships, while working as a scientific/technical writer for a website, while trying to deal with car problems, issues at home, whatever it may be, things tend to stack up, and eventually it can become too much and something has to give.

Now picture if you had a circular plate-like piece of polyethylene (a polymer or “plastic”) and you attached a bunch of small clamps all the way around the circumference and started pulling with the same amount of force in all directions.  Now we start increasing this force more and more…what happens?  There is a phenomenon in the world of engineering called the Poisson Effect.  The Poisson Effect basically tells us that as we stretch this material in this 2D plane (as shown in the picture), the material will compress in the direction orthogonal (or perpendicular to the plane)…so as we stretch the disk in all directions as shown above, the material will compress in the direction into/out of your computer screen.  Now as we pull harder and harder on this disk from all of these directions, the disk will get thinner and thinner until it can no longer bear the applied loading and the material will fail.  The material will likely fail near a stress riser, such as at the point where one of our clamps is pinching the material.

Flash back to the real world and we see that if we try to pull ourselves in a million directions with all of our effort, eventually something has to give.  A better practice might be to prioritize our efforts and focus a little bit more in one direction than the rest.  This might mean letting one of your teammates take over as team leader in one class so that you can focus more of your effort in another direction that may be more important.  Perhaps the ideal situation would be to pull with all of your effort in one direction, I cannot comment on whether this is the right decision all of the time, as every situation is different.  What I will say, is that you should keep in mind that from an engineering standpoint, if the plate was still to begin with and we pull equally on that plate in all directions, the plate cannot go anywhere, rather it will remain in the same position and eventually fail; however, if we focus more in one direction than the others, we can end up with a net force in one direction, and as follows from Newton’s 2nd Law, when we have a net force in one direction applied to a mass, that mass will accelerate in that direction…just something to keep in mind.

Even if we do figure out one direction to move towards, that doesn’t necessarily mean smooth sailing from there.  Often times in life, we encounter distractions and obstructions to our goals.  Some of these may be unavoidable, but we may be able to avoid others entirely.  Perhaps when we see have a choice between being dragged down by obstacles that are avoidable and choosing the path of least resistance, we should choose the easier of the two paths.  Now I am not saying that we should avoid all difficulty in life, no I’m not saying that at all, in fact, I am saying quite the opposite.  It’s been said that nothing worth doing ever comes easily, and I agree with that sentiment entirely; however, there are obstacles that can be avoided so as not to distract you from focusing your effort on the unavoidable ones.  These obstacles may be things like peer pressure or unhealthy habits that you know are not good for you and which will delay or maybe even prevent entirely your achieving your goals.

We can further justify this standpoint through an engineering analogy.  As has been discussed many times on TeamUV.org (perhaps most recently in Andrew’s post on hydroelectric power), moving fluid can be used to generate electricity.  In the picture above, we see an over-simplified diagram showing water flowing into turbines that will be used to generate electricity for power output.  Now, essentially (from a very rudimentary point of view) what will happen is that the turbines will use the energy contained in the moving water to convert the water’s mechanical energy into electrical energy which can then be stored or used to power whatever we would like to power.  Now let us consider the two cases shown in the picture above.  In the first case, the water is flowing steadily down sloped terrain towards the turbines located downstream.  This water will accelerate as it moves downstream due to the gravitational acceleration associated with change in elevation.  As the water accelerates, it builds up momentum; this momentum can be seen as an increase in available energy in the fluid and once the water reaches the turbines, it will be this energy that is used to generate electricity.

Now let’s look at what happens in this second case, where the water is no longer flowing steadily in an unobstructed manner towards the turbines.  The water is now running into obstacles left and right, and every time it does this, it loses a little bit of momentum.  Look at it this way: the water accelerates downhill, building momentum, and then BAM!…it runs into a rock, forcing it to lose momentum and thus also lose some of that available energy.  Where is that energy going?  A large portion of it is being transferred to the obstacles themselves.  This energy transfer may mean the rocks being pushed a little bit downstream, or perhaps even heated a small amount (although since there is water flowing over the surface of the rocks, providing efficient cooling convective heat transfer, the heating is negligible), or maybe this energy is being put towards erosion of the rocks…the point being, this energy is being transferred out of the moving fluid.  By the time the fluid reaches the turbines, the available energy for doing work on  the turbine blades to produce electricity has been greatly reduced.  Comparing this to the first scenario, you can see how these flow obstructions can take up energy and reduce the amount of work able to be done in the end.

Moral of the story: if you are able to avoid destructive obstacles in life (as opposed to constructive ones that are necessary to get to where you want to be in life), you can avoid expending energy on trying to maneuver through these destructive obstacles, which would otherwise in the end reduce the amount and quality of the work you would have been able to produce by avoiding them altogether. 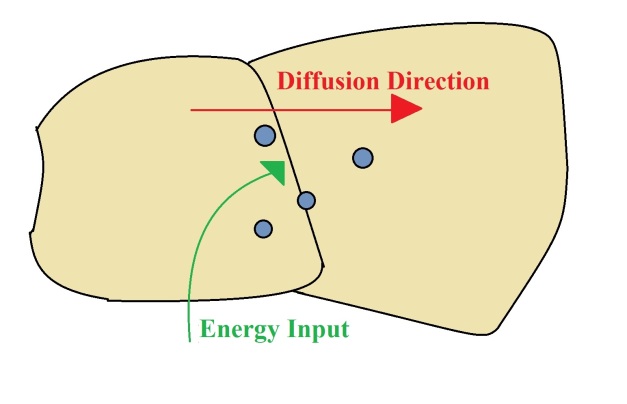 Lastly, I want to note that any obstacle, regardless of size, can be overcome if you are willing to work hard enough to do it.  Take the subject of grain boundary diffusion for instance.  Grain boundaries are exactly what they sound like; that is, they are boundaries between grains in a material (in this case we will think of a metal).  These grain boundaries act as barriers to movement of dislocations and thus an increase in grain size results in an increase in yield strength…in simpler terms, the larger the grains in a material are, the more difficult it becomes to deform the material.  What is the point of mentioning this all?  The point is to underline the fact that grain boundaries serve as obstructions to movement of dislocations and atoms, just as difficulties in life lead to the impeding of forward progress.  But all is not lost, atomic diffusion across grain boundaries is not impossible.  With enough effort, diffusion across these grain boundaries can occur.

There is an activation energy that describes an energy threshold that must be overcome in order for diffusion across the grain boundaries to occur.  This energy threshold can be breached by adding enough thermodynamic energy to start the diffusion process across the grain boundaries.  In life, you may arrive at objects that seem impassible, but that is not the case.  All you have to remember is that there is always a threshold, or activation energy so-to-speak, where if you can work hard enough to overcome that threshold, you can achieve your goals.  It is not a matter of whether something is do-able, it is a matter of whether or not you are willing to work hard enough and put in enough energy to do it.

So there you have it, just three examples of the endless ways in which engineering subject matter can be used to each life lessons.  Hopefully we all take something away from today’s post…whether its the importance of prioritizing, or the costs of letting destructive obstacles drag you down, or simply the age-old mantra of mind over matter, hopefully we all walk away a little bit more determined today, because life is what you make it and you will only get out of it what you put into it.

Enjoy the rest of your weekend and be sure to check back on Tuesday for Andrew’s last Well Read post!